An emulator is a program or a hardware device that allows your connected device like a computer to imitate a different system. Usually, an emulator is used for popular hardware devices when they become outdated or are not compatible with the majority of machines in the market. Terminal emulation is a term that refers to the use of emulators to make an older program work with a new device.

Android is one of the most commonly used open-source mobile operating system with over one billion active users around the world. These numbers are only going to get higher, as Google is initiating higher-level programs to give the world better Internet connectivity.

Emulators are much more than just a software solution; they are gateways to entire software libraries of another device. Android emulators for Linux are not only popular for the fact that they allow you to run any game or program of Android on Ubuntu, but they are also enjoyed as they open the complete Google Play library to people who are not using Android devices.

Android operating system dominates smartphones market. There are multiple Android emulators for Linux OS that are much secure than Windows OS. Most emulators can replicate themselves and to make them useful, and you have to run the game or software through the emulated operating system. This may cause many serious legal issues, as most of the games shared online are pirated.

Android emulators find an alternative way to this problem. Once you install an emulator on your system, your Android is running on your computer, and you will get access to entire Google Play app store. This is legitimate installation, and any app that you download or purchase from Google Play is also legit.

Before you begin using Android emulators, you need a few things to start with the emulation. You need a computer with Linux, Google account, and install emulators. Which Android emulators for Linux are the best ones? Read on to learn more about them!

This emulator is a result of Genymotion project and is known to work flawlessly in majority of the cases. There are many amazing features of this emulator, but the most common one is the availability of offline mode. It can support OpenGL rendering, Net Sharing, Internet Sharing, and much more. You can install and use it on both 32-bit and 64-bit Linux kernels. 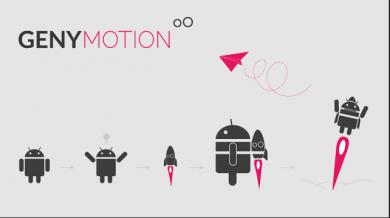 It is arguably one of the best Android emulators for Linux on the market. You can easily download pre-configured Android images of various versions, directly on the emulator. You can also configure your RAM and other resources allocated to the emulator and it also directly supports networking through Ethernet. Other incredible features include OpenGL hardware acceleration support, drag and drop transfer to emulated SD card, and enhance user experience. See here how to install Genymotion in Ubuntu

This is an emulator that is among the top favorites for Mac and Windows emulators as well. You can enjoy the Linux version of Andyroid in beta development as well, but running it on VirtualBox will enhance your experience on a Linux computer.  It is a favorite for gaming enthusiasts, and includes Google Play Store support inbuilt and even for Windows. It also has multi-touch support and converts your phone as a controller for the game. The features of camera and microphone are supported along with OpenGL hardware acceleration.

The Official Android SDK is similar to Genymotion and is widely available, directly from the sources. It is also a great software solution for app developers on the Android platform, is much more than just an Android app running program. It is directly from Google and is considered as one of the most well built emulators. Not every Linux user will become friendly with this platform, but it has a far better performance than other third-party emulators. Other features include, SD card support, physical keypad support, high-quality products, and easy setup.

This is an emulator that might not be free, but gives you access to a large base of games on Android. You can find and play any app or game that you can find on Google Play Store with BlueStacks, which other lesser-known emulators are still trying to achieve. This choice really depends on the type of apps and games that you want to run on your Linux. If you’re looking for high-end gaming experience and don’t want to compromise on the user experience, then this emulator is the one for you!

These are by far some of the best and most used Android emulators for Linux that are available online. The longstanding benefit of using emulation process for Android is that you don’t need invest your time and money for searching additional software on the Internet. You will get access to the entire Google Play collection, exactly like the access Android users get.