Chrome vs Chromium. A detailed article for the differences of Google Chrome and Chromium internet browsers. In the previous article for how to install Chrome on Ubuntu and Mint we mentioned an internet browser that is called Chromium and we also said that Google Chrome is based on it. Those two browsers seem to look alike and in this guide we’ll see with what criteria we’ll choose which one to install.

Chromium is the open source project from which Google draws the source code for the creation of Chrome. Practically Googles purpose was that Chromium was supposed to be the name of the project and not the browser. Like Google mentions to the instructions for programmers  the name “Chromium” must never be mentioned to the code, to variables, APIs etc of Chrome. But since the code  of Chromium project is open, some of the programmers decided to release it autonomously as Chromium browser. Since Linux community shows clear preference to open source software, Chromium is the browser that exists in repositories of the most Linux Distros.

What differences has Chromium compared to Chrome?

Practically those two browsers share the majority of the source code and features, and generally their differences are small. The biggest part of differences has to do with the fact that Chrome includes some closed source apps like audio and video codecs (AAC, H.264, MP3), Flash, PDF Reader – which opens PDF files inside the browser. 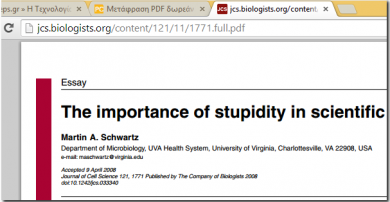 When Chromium is installed is 100% open source and it doesn’t include the above apps. Of course we can install them afterwards from the repositories of our Linux Distribution so we can have fully the features of Chrome. Also, chrome has the feature of automated “silent” updated in it’s last edition and also the capability of sending message to google in case of a crash. The code for the automated updated has not been include in Chromium because maybe someone will want to use Chromium’s source code to build his/hers own browser like it happens with Torch and Iron. Last, Chrome has deactivated some security characteristics like Sandbox while in Chromium it depends on the distro if Sandbox will be activated or not.

There is a tale that with Chrome, google watches our personal data while with Chromium we’re safe from the surveilance. In reality though, both of those browsers have exactly the same settings when it comes to privacy and we can fully set up what’s going to happen while we’re browsing. For more info see Chromes Privacy Settings.

Is it possible to install Chromium on Windows?

Chromium can be installed in any OS that supports Chrome either it’s Windows, Mac or Linux. Visit the page of Chromium and it will show you automated the choice for our own OS. Also the download is in portable format which doesn’t need installation. All we have to do is decompress the files and run the Chrome app. Since it doesn’t update automatically, if we want something more from Chrome, google suggests Chrome Canary or the Dev edition of chrome which incluled the newer features before the Chrome.

Which one to choose? Chrome or Chromium?

Well, if we consider that those two are practically the same, just with some lss characteristics, Chrome is the best choice for most users. In Linux it’s a little bit of trouble to install it because it’s not avaiable in software center but again it’s simple. See here how to install Chrome in Ubuntu and Mint. But again, if you want to try chromium go ahead and do it, it’s free anyway!

You can check here a visual comparison of Chrome vs Chromium: